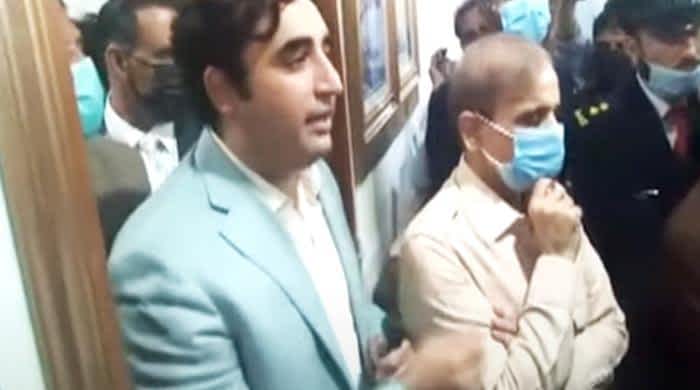 PPP Chairman Bilawal Bhutto Zardari and PML-N President Shahbaz Sharif speaking to the media in Islamabad after the budget session in Islamabad, on June 11, 2021. — YouTube

The Opposition will work together and give a tough time to the government and not let it pass the budget, PML-N President Shahbaz Sharif and PPP Chairman Bilawal Bhutto Zardari said Friday.

Speaking to the media alongside Shahbaz after the parliament’s budget session, Bilawal said that the people who might have been listening to Minister for Finance Shaukat Tarin as he unveiled the government’s proposals, “must have been thinking that this is some other country’s budget”.

Bilawal said it did not sound at all like the budget Pakistan needs, with its “historic inflation, unemployment, and poverty”.

“The prime minister and finance minister’s claims of economic growth are baseless amid such a situation.”

The PPP chairman said the finance ministers’ claims were akin to “rubbing salt in the wounds” of the Pakistanis who are “suffering” due to the government’s policies.

“All differences among the Opposition parties aside, we will collectively respond to this selected and incompetent government’s budget […] I reiterate my promise that all of PPP’s MNAs will entrust their votes to Opposition Leader Shahbaz Sharif to use against this government’s budget,” he said.

Meanwhile, Shahbaz said the Opposition would join hands and give a tough time to the government during the budget session and will expose their “fudged” figures.

“When poor people are dying of hunger, unemployment and inflation are skyrocketing, how can they claim that the country is witnessing economic growth?” the Opposition leader asked.

Responding to a question, Shahbaz said that the Opposition parties would devise a joint strategy for the no-confidence motion that was moved against NA Deputy Speaker Qasim Suri a day earlier.

Taking to Twitter, PML-N leader Ahsan Iqbal slammed the government’s proposal to increase the income of salaried individuals by 10% and called the move the “worst joke”.

“A 10% increase in the salaries after record inflation is the worst joke made by the government with them,” tweeted Iqbal.

“We reject this. At least a 20% increase should be given,” said the former interior minister.

Undeterred and aided by a pair of earphones that allowed him to drown out the ruckus around him, Tarin announced that the total outlay of the budget for the upcoming year had been kept at Rs8,478 billion, with the tax target set at an ambitious Rs5,829 billion.

Speaking about the various allocations made by the government, Tarin said Rs480bn had been allotted for pension payments of both civilians and retired military officers.

He said the defence budget of the country had been allocated Rs1,370bn while the government had earmarked Rs1,168 for development and non-development grants for provinces.

He said the government had allocated Rs682bn for subsidies to various sectors of the economy, adding that Rs479bn had been allocated to run the civil government.

Tarin said the government was serious in stemming the spread of the coronavirus and keeping its adverse effects at bay, adding that the government had set aside Rs100bn for it.

He said the federal PSDP had been allocated Rs900 billion.

Tarin lashed out at the previous governments, saying that a mountain of circular debt amounting to Rs1 trillion was inherited by the incumbent government due to the botched policies of its predecessor.

“We made the [capacity] payments otherwise the country would have defaulted,” he said. “I am presenting you the real picture of the nation and to highlight our performance,” added the minister.

Sarfraz Ahmed, 25 others unable to attain UAE visa for PSL 2021