With little to no chance of rain, Karachi to bake for two days 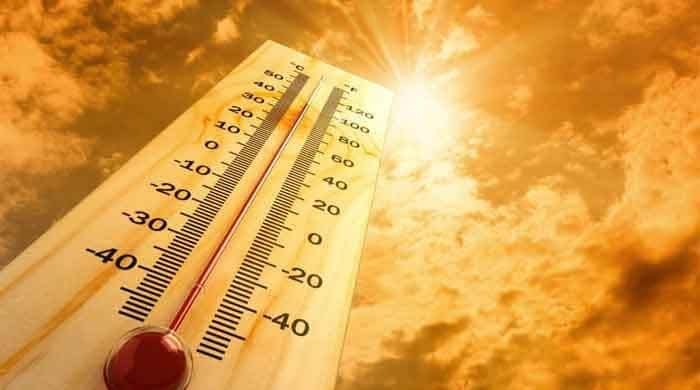 There is little to no chance of rain in Karachi under the influence of tropical cyclone Tauktae, so the weather is expected to remain very hot on Monday and Tuesday, according to Sindh’s chief meteorological officer.

“There’s little to no chance of rain in Karachi, Hyderabad or Benazirabad, but it will result in very hot weather in these cities with gusty winds for at least two days,” said Sardar Sarfraz. “The maximum temperature is likely to remain between 41 and 43 degrees Celsius.”

He said that the severe cyclonic storm Tauktae had intensified into a very severe cyclonic storm, moved further north-westward at a speed of 15 kilometres during the last 12 hours, and by 2000 PST of 16 May 2021 near latitude 16.8N and longitude 72.4E, at a distance of about 1000 km south-south-east of Karachi.

“The maximum sustained winds around the system centre are 150 to 170 kmph gusting to 190 kmph. The system is likely to move further north or north-westward and cross Indian Gujarat by 17 May night or 18 May morning.”

Sarfraz said that due to the shift in the cyclone’s course, the prevailing environmental and meteorological conditions such as dust storm, thunderstorm and rain with a few moderate to heavy falls with gusty winds of 60 to 80 kmph are likely to occur in Thatta, Sujawal, Badin, Tharparkar, Mirpurkhas, Umerkot and Sanghar between 17 and 19 May.

“Karachi, Hyderabad, and Shaheed Benazirabad are likely to experience hot to very hot weather with gusty winds and blowing dust during the next two days. Sea conditions will remain rough to very rough, so fishermen are advised not to venture in the sea until 19 May.”

He said that the maximum temperature is likely to remain between 41 and 43 degrees Celsius on Monday and Tuesday, adding that the weather will start improving in Karachi from Wednesday noon or afternoon with a change in wind direction and the resumption of sea breeze.

A meeting held at the Chief Minister House on Saturday to discuss the cyclone emergency was told that starting Tuesday, Karachi may experience dust storms, thunderstorms and gusty winds.

“Emergency should be declared in all the districts along the coastal belt of Sindh, while a control room should be established at the chief secretary’s office to maintain close coordination with all the districts in respect of their requirements and for issuing them necessary instructions on behalf of the government.”

Briefing the CM, Pakistan Meteorological Department (PMD) Director Sardar Sarfraz said that there are two possible tracks of Cyclone Tauktae, adding that if the cyclone crosses India’s Gujarat, its outer peripheral effect would be on Thatta, Badin, Mirpurkhas, Tharparkar, Umerkot and Sanghar districts.

He pointed out that if the cyclone crosses the north-west and crosses the west of Karachi, its outer peripheral effect would be on Karachi, Hub, Lasbela, Hyderabad and Jamshoro districts.

Sarfraz said that there is a generic term for non-frontal anti-clockwise rotating weather system with surface wind ranging from 34 to 47 knots (kts). He added that it usually causes three types of impacts: torrential rains, thunderstorms, and high intensity winds and storm surges.

He said that the main source of energy for tropical cyclones is the warm water in tropical regions, adding that to initiate a tropical cyclone, the sea surface temperature generally becomes 26 degrees Celsius. He also said that the cyclone classification in Pakistan and South Asia causes different kinds of disturbances.

He explained that gusty winds and damage in detaching fruit from the tree is caused when a depression develops a pressure of 996 hectopascal or millibar (hPa/mb) with a wind speed of 22 to 27 kts.

He continued that when deep depression with a pressure of 986 to 995 hPa/mb develops with a wind speed of 28 to 33 kts, negligible damages are caused to houses, fruit trees, some crops and caravans.

He said that when a cyclonic storm has a pressure of 971 to 970 hPa/mb along with a wind speed of 34 to 47 kts, it causes minor damages to houses and significant damage to signboards, trees and small crafts.

He added that a severe cyclonic storm emerges when there is a pressure of 930 to 955 hPa/mb with a speed of 64 to 89 kts, and it causes significant structural damage, with caravans blown away.

In this way, concluded Sarfraz, the two other categories are extremely severe cyclonic storm and super cyclonic storm, which cause extensive damages to houses, and power and communication lines.

Provincial Disaster Management Authority (PDMA) Director General Salman Shah told the meeting that the depression over the Southeast Arabian sea has intensified into Cyclonic Storm Tauktae, lying centred at 0800 PST of 15 May 2021 near latitude 12.7N and longitude 72.3E, at a distance of about 1460km south-south-east of Karachi.

He said that the maximum sustained winds around the system centre are 90 to 110 kilometres per hour (kmph), gusting to 120 kmph, adding that the system is likely to intensify further into a severe cyclonic storm during the next 12 to 18 hours, moving in the north-north-west direction and reaching India’s Gujarat by the morning of May 18.

He pointed out that under the influence of this system, widespread heavy to very heavy dust storms, thunderstorms, rains with gusty winds of 80 to 100 kmph are likely to occur in Thatta, Badin, Thar, Mirpurkhas, Umerkot and Sanghar districts between May 17 and 20.

He said that dust storms, thunderstorms and rains with a few heavy falls and gusty winds of 50 to 70 kmph are also likely in Karachi, Hyderabad, Jamshoro, Shaheed Benazirabad, Sukkur, Larkana, Shikarpur, Jacobabad and Dadu between May 18 and 20. He added that the sea conditions would be rough to very rough, advising fishermen not to venture into the sea between May 16 and 20.

Considering the presentations by the PMD and the PDMA, the chief executive directed the administrations in Karachi to start clearing all the choking points of nullahs.

He ordered Karachi Commissioner Naveed Shaikh and Karachi Metropolitan Corporation Administrator Laeeq Ahmed to start removing all the billboards and neon signs, and to ask builders to take precautionary measures to secure their under-construction structures.

He directed the PDMA to provide dewatering machines and generators to the district administrations in the city as well as in the other districts of the province where they may be required. He ordered fishermen not to go in deep sea for fishing from Sunday.

The Government of Sindh has established a central control cell on the second floor of the new Sindh Secretariat building No. 1 in Karachi in view of the tropical cyclone Tauktae. A handout released by the government states that the cell will work round the clock, and resolve issues throughout the province related to rains that are expected due to the cyclone.

The cell will coordinate with other cells established for the purpose by Sindh’s inspector general of police, Rangers director general, health and home departments, and Provincial Disaster Management Authority, as well as by the commissioners and deputy commissioners.