‘You do not tell parliamentarians what to do,’ Mandviwalla blasts Shahzad Akbar 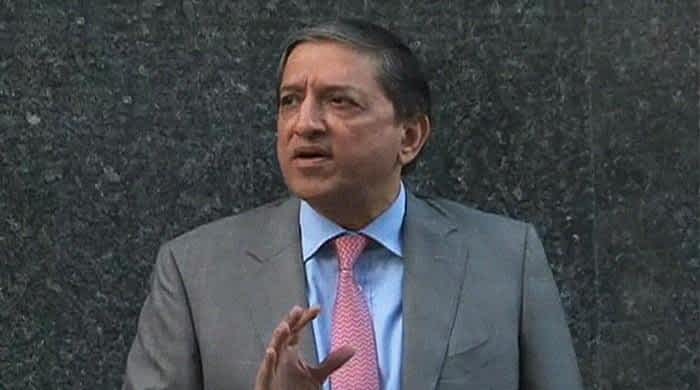 Senate Deputy Chairperson Saleem Mandviwalla speaks to the media here in Islamabad, Pakistan, December 23, 2020. Geo News/via Geo.tvParliamentarians “can raise and file a privilege motion at any time, at any place”, says MandviwallaMandviwalla notes that parliamentarians agree with the issue he raisedSpeaks of NAB’s “fear and harassment”, says “everyone comes and whispers to me that they’d tell me what they went through”Says NAB Chair Justice (r) Javed Iqbal “will come to us himself and he will not violate the Constitution”

Speaking to the media here in Islamabad, Mandviwalla said Akbar did not have any right to tell him not to pass a privilege motion.

“So now Shahzad Akbar will tell the parliamentarians how to run the Parliament? I want to tell him that a privilege motion is a right of each parliamentarian, not just mine.

“They can raise and file a privilege motion at any time, at any place, and you’re no one to tell parliamentarians not to call meetings or raise privilege motions. Focus on your own work and stop meddling in the Parliament’s workings,” the Senate’s deputy chair added.

Mandviwalla said the parliamentarians being mentioned had worked with him in the Opposition and agreed with the issue he had raised. “They may probably not speak in the press about it but they’re all standing strong with me and you see what happens the day the [Parliament] session is called,” he stressed.

The businessperson-turned-politician further noted how people had shown some reservations and that he was waiting for someone to come to him and speak about it.

Responding to a reporter’s question as to whether he had delayed reaching out to the chambers of commerce across Pakistan, he said there was no fixed time for such matters and that it was “a continuing process”.

“Now that this [matter] has been taken up, all businesspersons and chairpersons are on board. You’ve seen how none of the chambers have said whatever is happening is not right,” he explained.

Mandviwalla dared journalists to mention a single businessperson or chamber official who would say what he was doing was not okay. “These are ignorant questions, now that this has commenced, God willing, there will be a result,” he said.

In response to another question, he said the Senate was the appropriate platform for him to raise such issues. “Do you want me to go on the roads and talk about it? Or do you want me to approach the press?

Mandviwalla added that he would write to the Senate chairperson again if need be and “if I have to submit another requisition for a meeting, I will do so”.

“There’s a limit to everything. Everyone comes and whispers to me that they’d tell me what they went through [at the hands of the NAB]. What is this? What is such fear and harassment for? There’s no issue of arrest right now.”

The Senate’s deputy chair underscored that NAB Chairperson Justice (r) Javed Iqbal would “come to us himself and he will not violate the Constitution” since the latter was a former judge.

“There’s no need for rumours you’ve spread about arrests and I believe he will follow whatever’s required in the Parliament,” he added before leaving the press briefing.