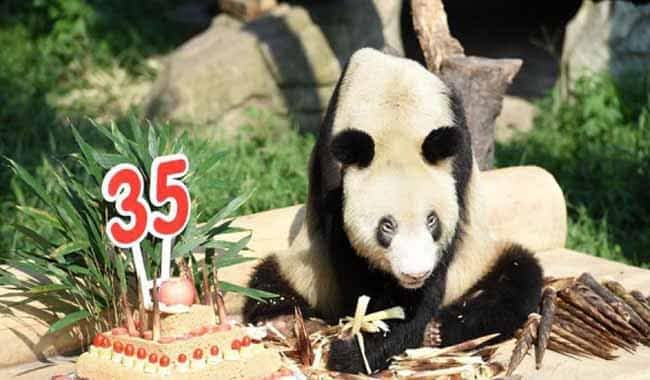 A zoo in China last week threw a centennial birthday party for its celebrity “granny panda” who turned 35, according to state-run Xinua news agency

Xinxing, born in 1982, is one of the oldest giant pandas in the world, She is the matriarch of a huge panda family of 90. Her children and grandchildren are spread across the globe in 20 countries and regions including the United States, Canada and Japan, Xinua reported.

Xinxing was treated with a feast of bamboo shoots and apples in the Chongqing Zoo at the birthday party.

The song “happy birthday to you” was being played as she ate. Her offsprings in the zoos of Hong Kong, Toronto and Memphis followed the human’s tech fashion to send their greetings via online video clips.

But the grandma does not live alone. She is accompanied by a son, five grand-daughters and two great grand-children at the zoo.

Xinxing was brought to the zoo at one-year-old. Her first birth was in 1992. In 2002, she broke the record of old-age pregnancy for panda when she gave birth to a twin at 20.

Her care-taker Yin Yanqiang said Xinxing remains fit at 35 and has not developed any serious aging problems.